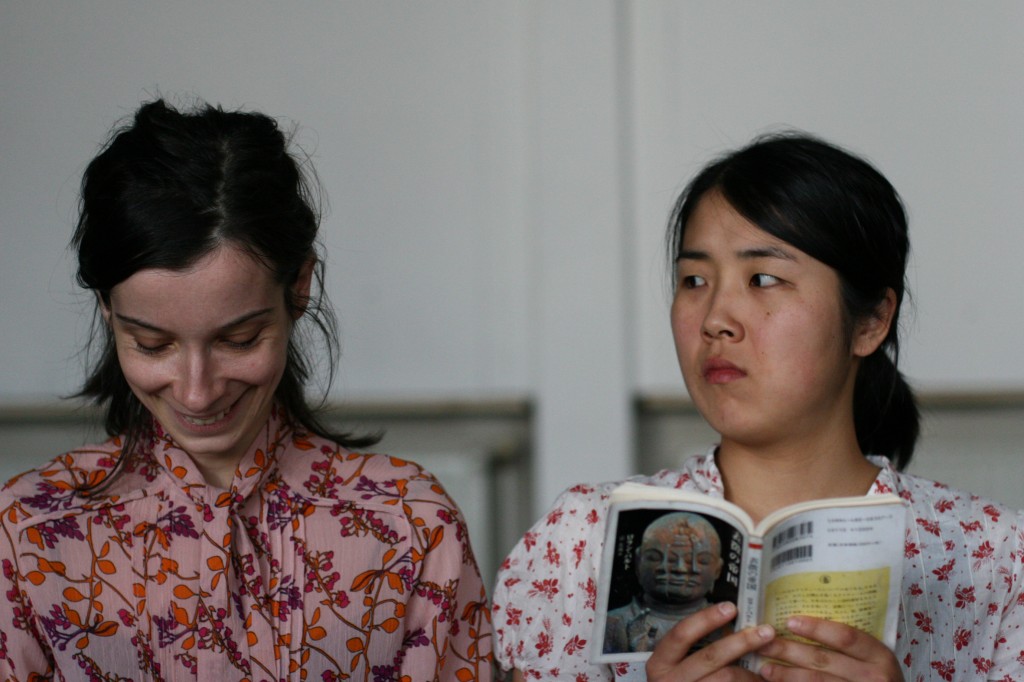 An investigation of the phenomenon of the meeting with japanese dancer

While repeating the first meeting which happened in the theatre space (first rehearsal) during the period of the research, the author questions the basic problem of repetition which brought as the end result the essence of the meeting -  the reality in-between.

In the research project Shame she investigates the phenomenon of the meeting.  The author meets the Japanese dancer. She articulates her fascination about the Japanese culture into a position where she tries to be surrounded by Japanese signes and codes of behaviour. For that she chooses to talk in Japanese. This position slowly tranforms through her abstract understanding of „the other“ in the confrontation/ meeting with that „other“. The beginning statement becomes new strucutre of meaning which is different not only in a discursive sense (it means something else) but in the formal sense as well (it is not constituted only of verbal formulations, but it becomes performative trace of the interaction where the statements become gestures, movements, physical situations).

“Since I was studying Japanese literature and language and Mime, I was always puzzled by the idea of how to combine these two disciplines. In the research project „Shame“ I initiated an encounter with young Japanese dancer Yurie Umamoto whom I inivited by internet to participate in the project. Material for the performance appeared through the persistent repetition of our first encounter which happened on theatre stage. During this process it has been transformed into the theatrical act. How does intimacy, discomfort, fascination, shame in front of the „other“ (as a private emotions during this encounter) changes into theatrical language? The direct communication between two of us is played in Japanese. Third female performer is voice over for our dialogue, playing it in English. Ritual gesture of giving the present (book of Roland Barthes „The Empire of the Signes“) becomes the vehicle for the interaction where the verbal formulations become gestures, movemens, physical actions”